I can’t help but say to myself over and over that I want films with POC and members of the APIA community to do well. I feel like if I said “Well – who really cares” that would go against everything I stand for…however, it doesn’t always mean that I’ll actually go see the film…because I still have to want to actually see the film.

And honestly…I just didn’t want to see this bad enough to go out and see it in the theater. If it comes out on HBO or Netflix, or there’s a disc floating around that happens to land in my player – well – yeah – I’ll watch it.

But I just couldn’t get myself to go – and the real reason – if I’m really honest with myself is, well… 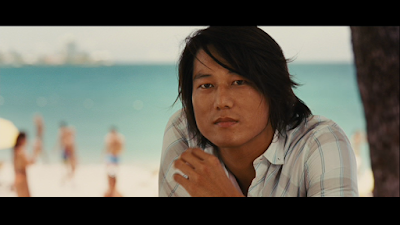 Some people love the mythology of Star Wars, The Avengers, Superman, DC Heroes – et al. – and while I myself aren’t as deeply embedded into that realm as others – I get it.

For me? My lore and film mythology I follow…one of them is The Fast And The Furious. Say what you want, but I’ve grown attached to the characters, the stories, and the lore.

Not only are the films good and demand that, but it was also the connection of Asian American director Justin Lin, his hand in the franchise – bringing it back to life – and doing it with the too often maligned “The Fast and the Furious: Tokyo Drift”.

It wasn’t just the film – but the Asian American representation behind the scenes and in front of the camera.

Say what you will – but that meant a lot – it sill does.

So when Han died and Shaw later came on to the team – for whatever capacity it was – it just didn’t sit right. Sure we watched it, and I thought he’d get his comeuppance…but you know – it didn’t happen. And I guess in some ways I thought it would come later – so I was okay with at least what initially happened in the film series.

But the internal fighting, the need for a spin-off – it all just felt….unlike “family” – especially when you consider the actual death of Paul Walker.

I mean – can you desecrate a franchise more then creating a spin-off starring the villain that killed off one of the main family members of the series?

I would get it if he was still a villain – but now I have to root for him in a spin-off?

And yeah – I understand DJ is APIA – and I feel really bad for Idris because they could have put him in a real F & F film – but I just couldn’t get past it.

And I Know It’s Not Whitewashing But…

Say what you will…but we’ve all (or at least many) have made the joke about Jason Statham being the White Guy who gets the Asian woman in some of his past films (and I still will never get past Shu Qi…) – or even recently in “The Meg” – somehow he’s the only one who can save the world and somehow gets the affections of Li Bingbing. And I know how that sounds – and Asian women, you do you – but when we’re looking off screen at the way Asian American and Asian men have been portrayed in Hollywood – there’s some truth we get to speak about this.

So I can’t help but honestly feel a little jaded that Han dies (well at least for now because he’s coming back MF’s), and his White killer gets a spin-off.

That alone just didn’t sit right with me…

Add to it that DJ, who let’s say it too – decided to take “family business” and take it public – and kind of said “screw you family”, was starring in the spin-off – I mean – that didn’t help it either. F & F helped build his film career.

And yes – you can call me petty for thinking all of this – but I can’t help it.

It’s what I feel.