Post Archives: And The College Sport With The Most APIAs Is…

I was reading this article at the Guardian a few days ago and while interesting, I wanted to check out some of the stats myself at the NCAA site in part because it seemed like women were excluded from the stats and I wanted to see those numbers, and I was also curious what the other other sports looked like.

Here’s a screenshot of two grids, for total numbers and percentages, from the NCAA database for all sports for 2016-2017: 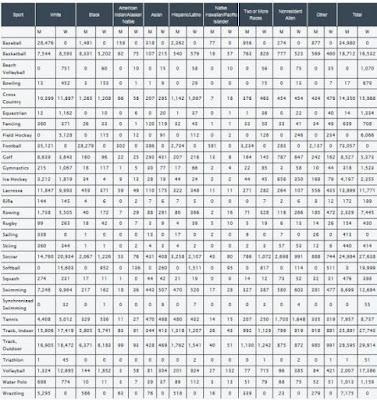 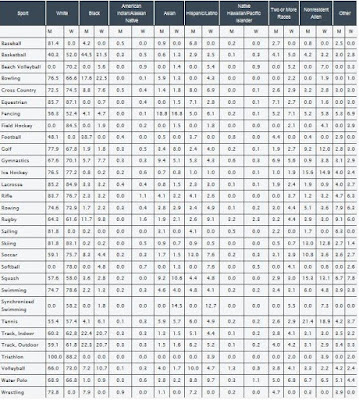 *Depending on how we qualify the word “most”, in this case a few items standout (according to the way I am ranking them):

3. While squash is fairly high in percentages for the Asian American in APIA, apparently the Native Hawaiian/Pacific Islander portion of APIA would rather play rugby (with percentages of 3.2% and 2.3%).

4. Who knew bowling was making a comeback? Although maybe I just haven’t been paying attention…

It is fairly easy to see why you don’t see as many Asian Americans in professional sports like football or basketball if you look at percentages alone– but it’s also legitimate to ask the question of if stereotypes and internalization of those stereotypes, and the racism that typically comes along with them, play a part in what specific sports young APIAs become engaged in.

*Note that percentages and totals are added from the “Asian” and “Native Hawaiian/Pacific Islander” columns.